What to do in Madeira

If you have never been to Madeira it is a place that I would strongly recommend that you visit.  The scenery is spectacular, from rocky seashores to towering mountain peaks.  Roadsides are filled with flowers, growing wild, that would normally be the stars of Chelsea.  An amazing riot of colour. 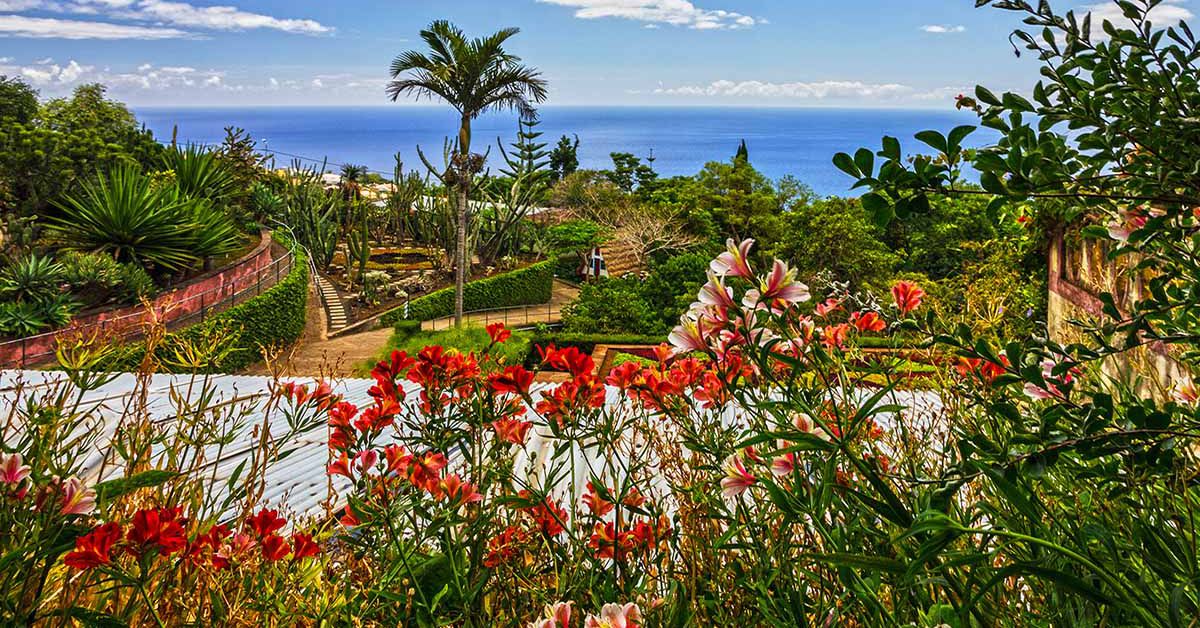 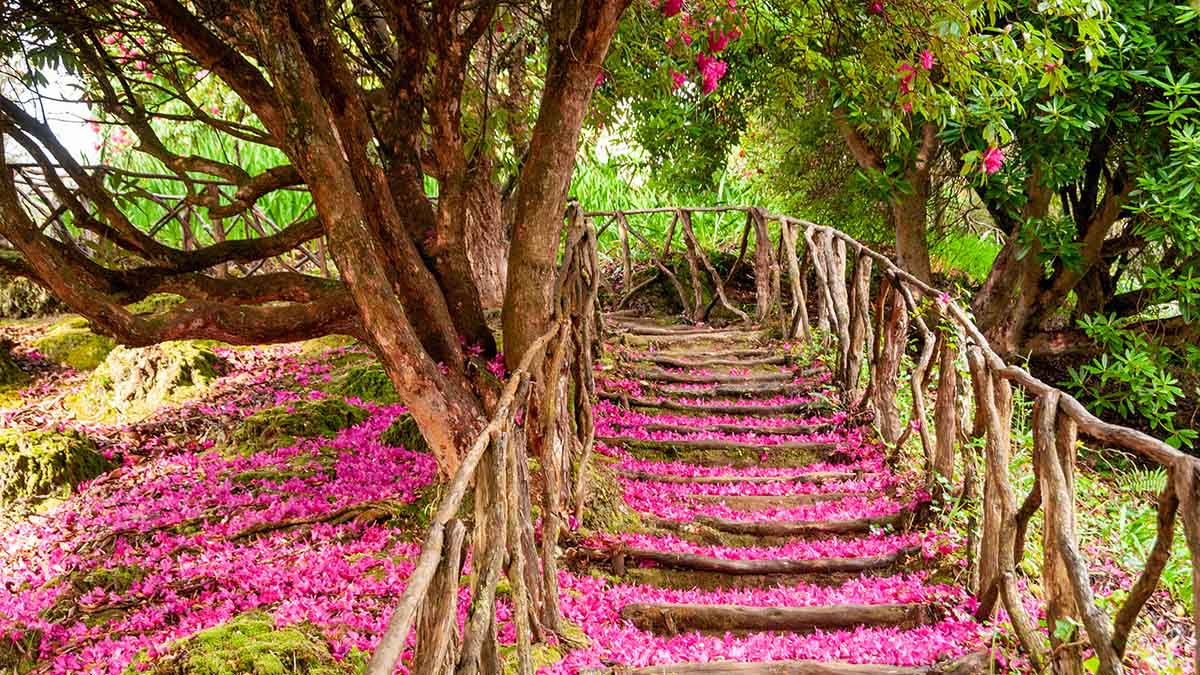 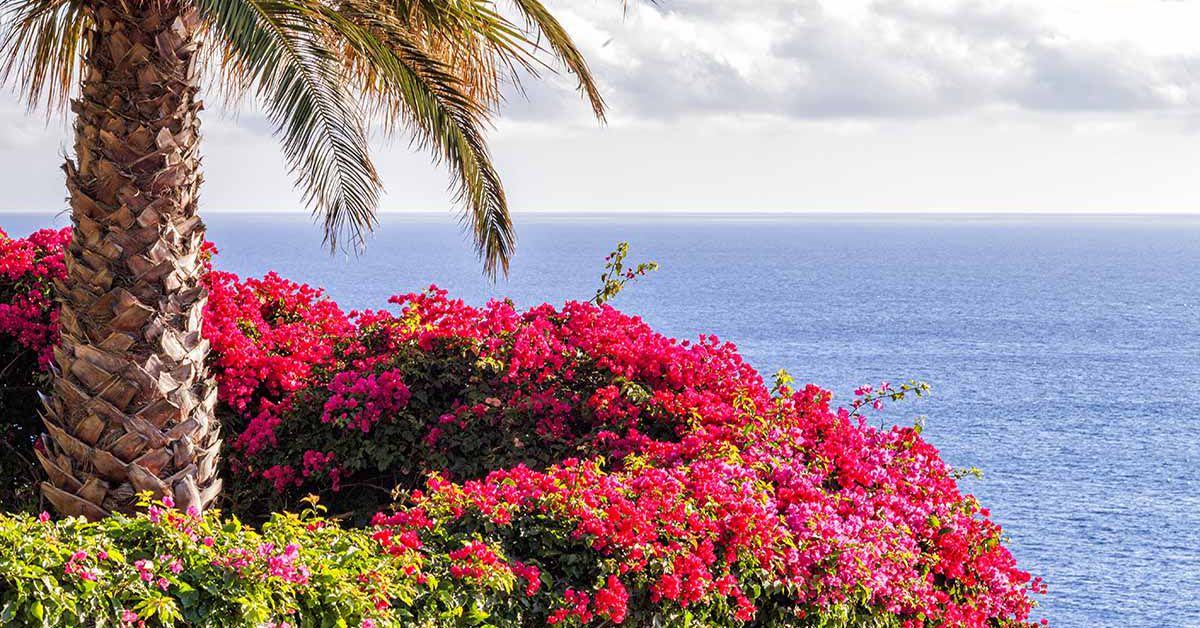 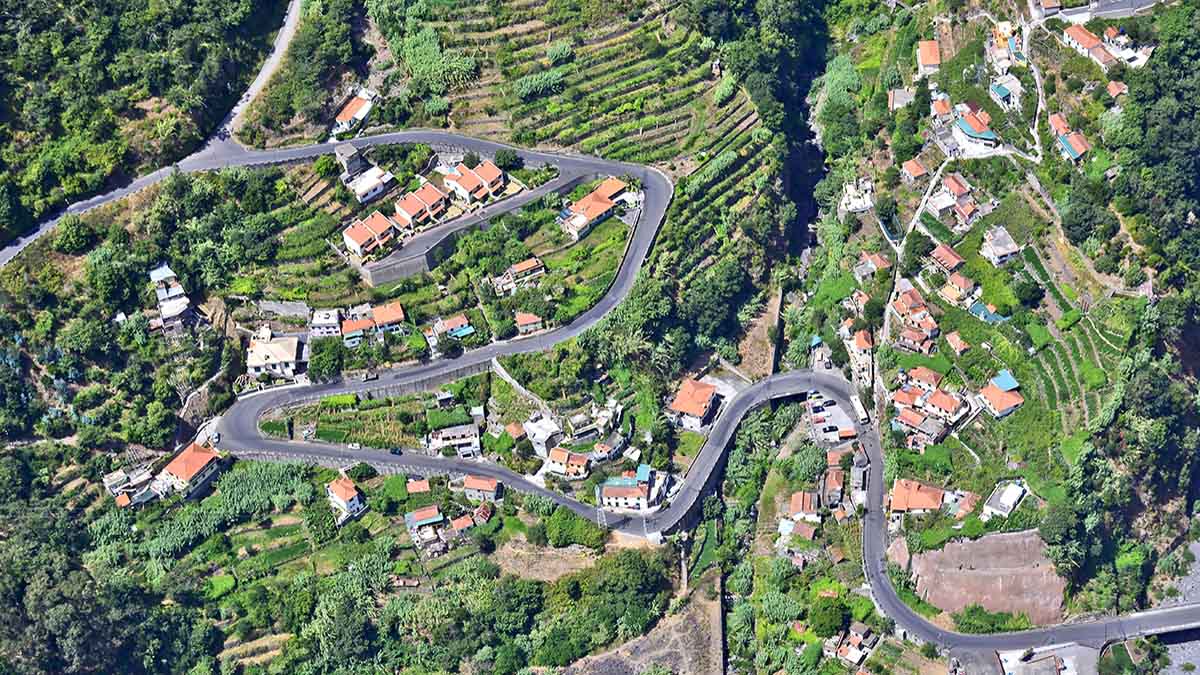 The mountains are spectacular, springing from volcanos, they have not been flattened or rounded over time, so the peaks and ridges look razor sharp.  Take a trip to the Nuns valley – a place that was cut off from the rest of the island until the 1960’s when the first road was built.  Even that road was not for the faint of heart and it is only in the last 20 years that a decent sized road that allows cars to pass each other has been built!  The road up to the look out at Eira do Serrado follows much of the old road and is still not to be taken lightly.

A drive around the South and West Coast from Funchal takes you first past Câmara de Lobos, made famous by Winston Churchill and is paintings.   Continuing will take you past the Cabo Girão - at 580m the highest promontory in Europe – there is a glass floored viewpoint at the top overlooking the small areas of cultivated land at the foot.  One of the amazing facts about Madeira is the lack of flat space.  Thus, all cultivation is on terraces built by hand up the steep mountainsides. 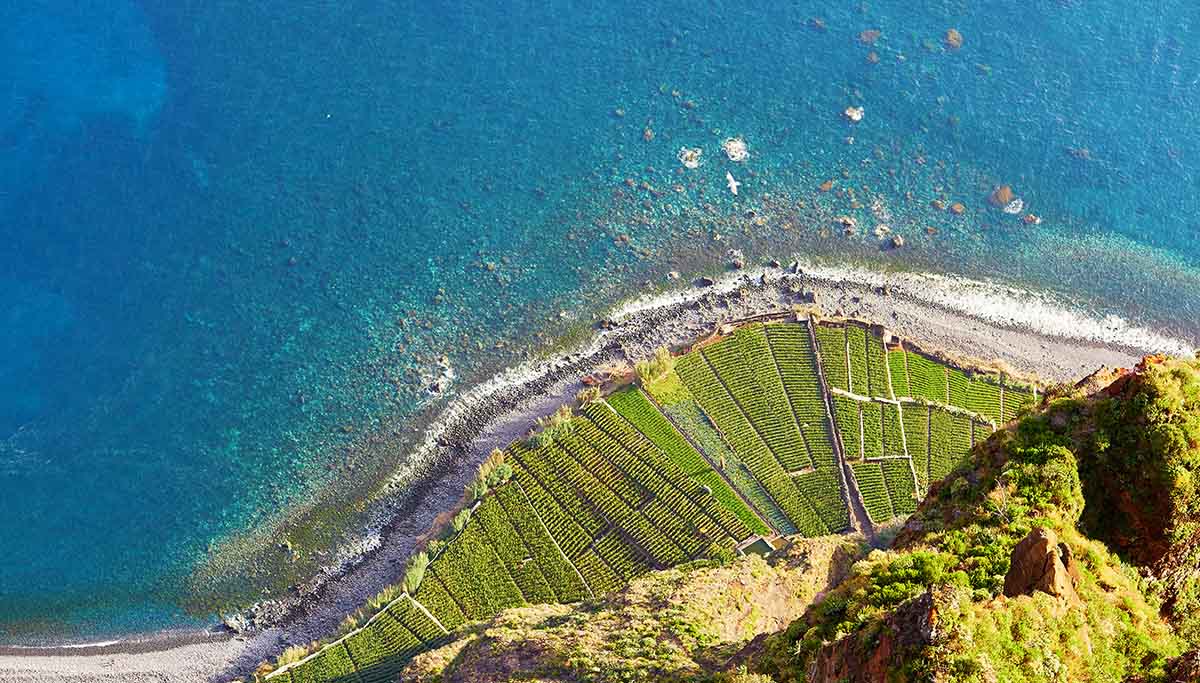 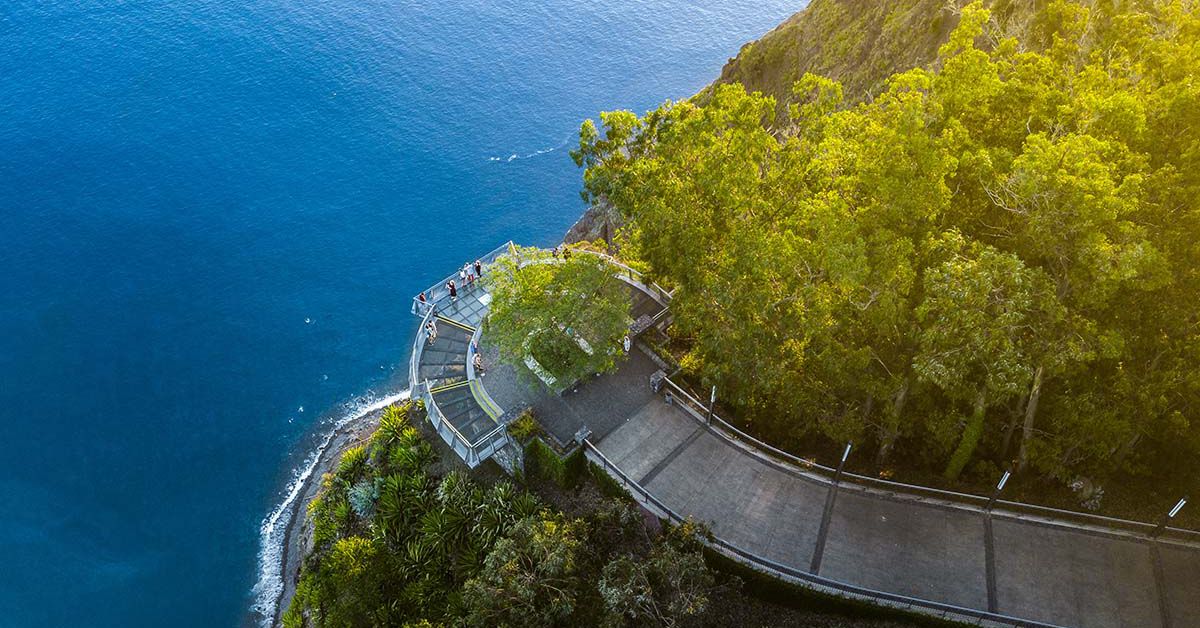 Continue around the coast, time permitting, wherever possible take the old road for its views rather than the new which goes through almost endless tunnels! 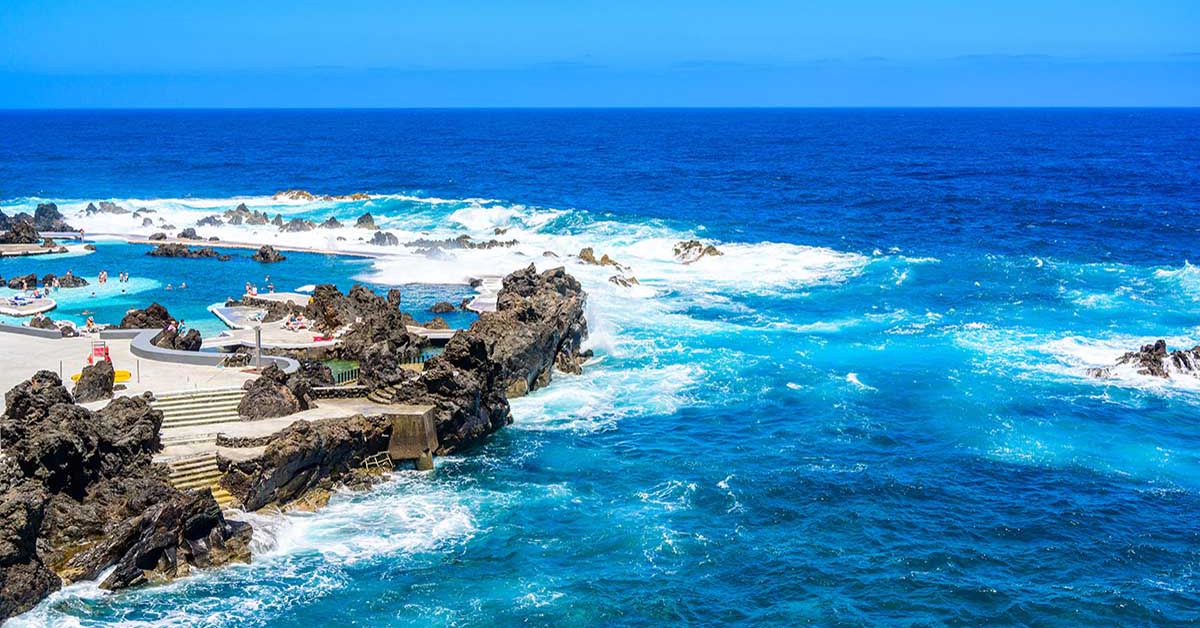 On hot day stop off in Porto Moniz and take a swim in the natural rock pools formed during a past volcanic eruption.  We did just 1.50 Euro entry and another 1.50 for a sun bed.  Social distancing was observed and the swim in the sea water was great – the pools are needed because the Atlantic rollers on this North West tip of the Island break with force against the protecting rocks.

A word here about Madeira and beaches – really there aren’t any.  There are a couple of manmade ones, but you don’t got to Madeira for the sand!  If you want sand, then you could split your time and spend a few days in the neighbouring island of Porto Santo where there is a very long golden sandy beach.

On another day take a drive along the North coast preferably from East to West as then you can take the parts of the original road that still exist (some of which are one way) – the ER101.  As one Madeira blog suggests:

‘In 2006, a brand-new road with lots of tunnels was constructed between Sao Vicente and Porto Moniz.

Fortunately, the old part of the coast road can still be used. Follow the signs "ER101 Antigua”!  This part of the road is one of the top tourist attractions on Madeira.’

The scenery along this route is spectacular with the tall mountains dropping almost straight into the sea.  To start cut across the island from the direction of the airport – a spectacular sight. 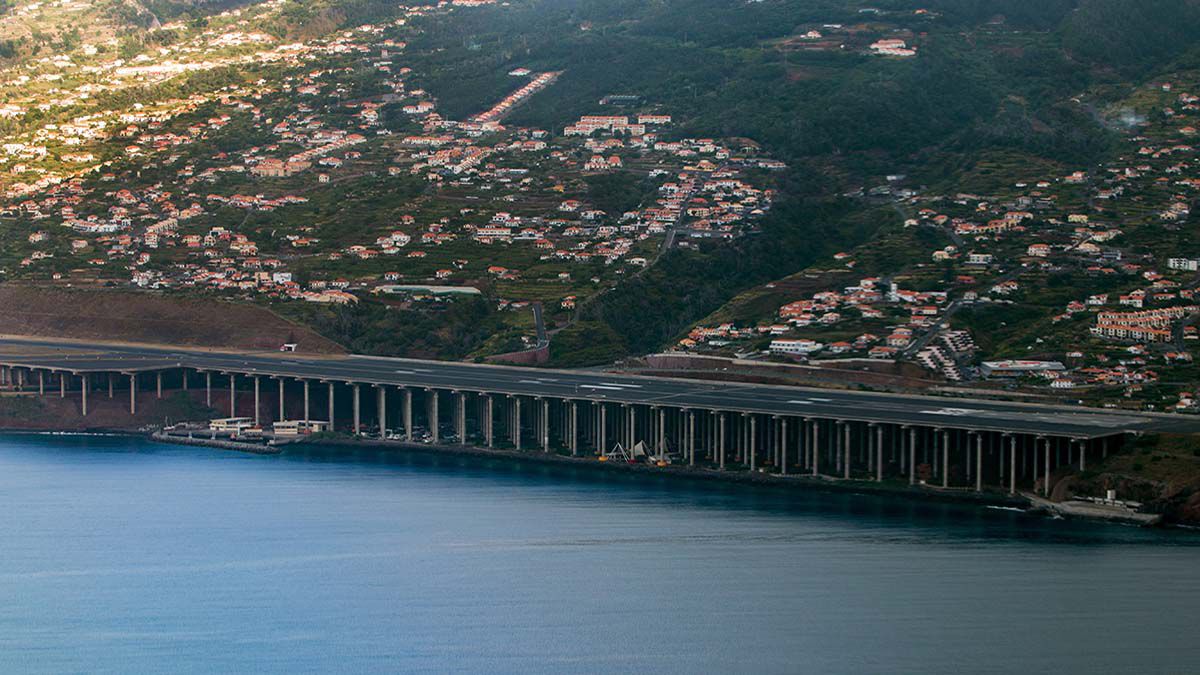 Madeira airport first opened in 1964 was once classed as one of the most dangerous airports in the world.  One of the approaches involved a flight in a circle around a bay hemmed in by steep mountains.  It was just 1,500m long, extended to 1,800m in 1972 the airport was then able to take 737 sized jet aircraft, though at the time depending on wind direction and whether the uphill runway was used for take-off an intermediate stop was often made for aircraft bound for the UK to refuel.

In 2002 an award winning further extension was built with the runway crossing a valley on stilts to increase the length to 2.781m enabling much larger aircraft to operate.

Travel up from the airport in the mountains and across the island to join the coast road.  Along the way drive down the valley of

the Ribiero Frio (Cold River).  For the adventurous there is a trek down the river involving abseils down several waterfalls.

Once reaching the coast you are greeted by the spectacular views over the Atlantic above Porto da Cruz.  Turn west to follow the coast road towards Porto Monitz.

On another day continue along the South Coast past the airport, Machico and Caniçal to the far Eastern area of Ponta de São Lourenço, which is characterized by several rock formations with hues ranging from red to black, and small islets. Walks in Ponta de São Lourenço offer stunning views of both the north and south coasts of the island, and of the Deserted islands and Porto Santo.

The main city on the island is Funchal.  Spend a day wondering around, take the cable car up to Monte and visit the beautiful Church of Nossa Senhora do Monte where Charles, last Emperor of Austria is buried.

There are 2 Botanical gardens here, one just by the cable car station and another reached by a further cable car, but you hardly need to as the flowers in Madeira grow by the roadside!

As an alternative to riding back down in the cable car take one of the ‘Monte Sledges’ – a hair raising ride in a wicker basket on wooden runners down the steep roads back towards Funchal. These 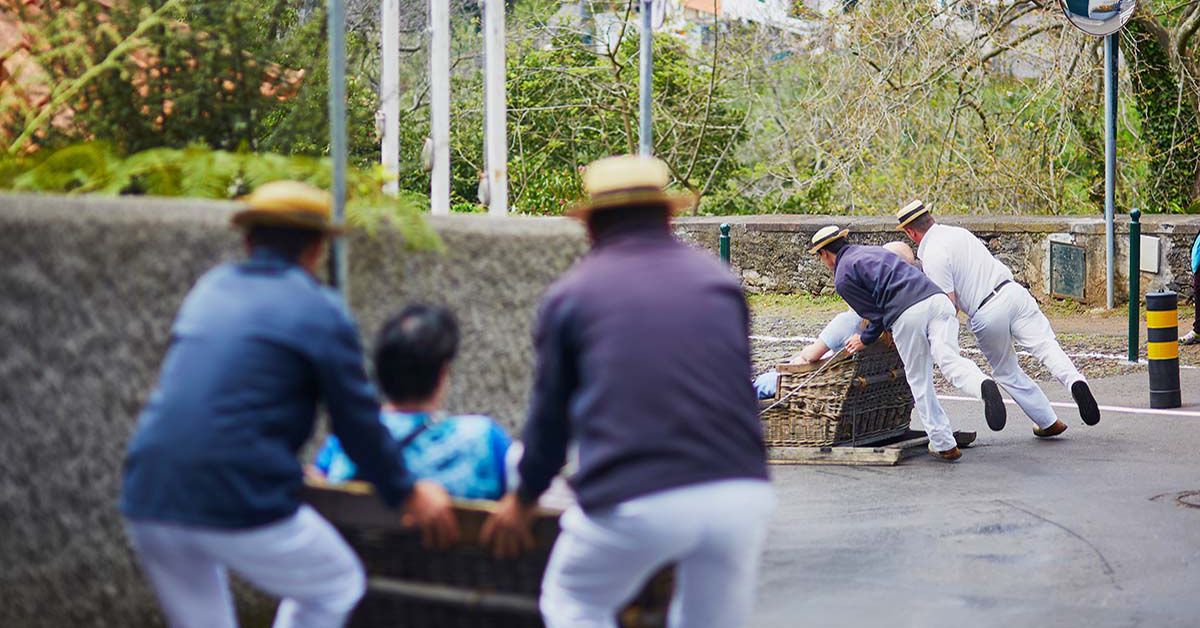 sledges are powered by two carreiros, or sledge drivers wearing white uniforms and straw hats, who control this mean of transportation by making use of their boots as brakes.  The 2km trip takes about 10 minutes!

This journey takes place between Monte and Funchal and is done in about 10m.

Madeira has many walks – but remember everything in Madeira is on a slope – usually steep! 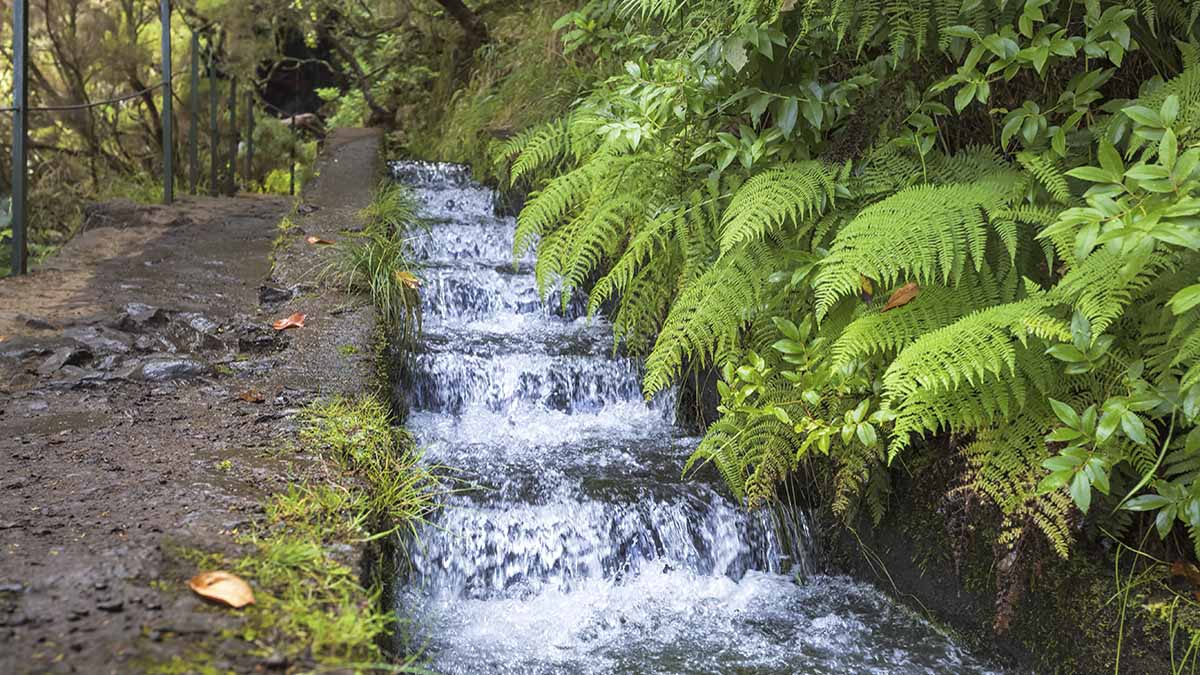 As part of the process of creating the terraces and preparing Madeira for agriculture they also built many irrigation ditches, bringing the water from the high mountains these Levadas make perfect walking trails.  Guided walks are offered along many and self-guided walks can be taken on some.

In addition, the mountains offer great hiking opportunities, but I advise that you take care as the paths are often steep and narrow with high drops.  Fog can aften come in within seconds at no notice. A guided hike is recommended. 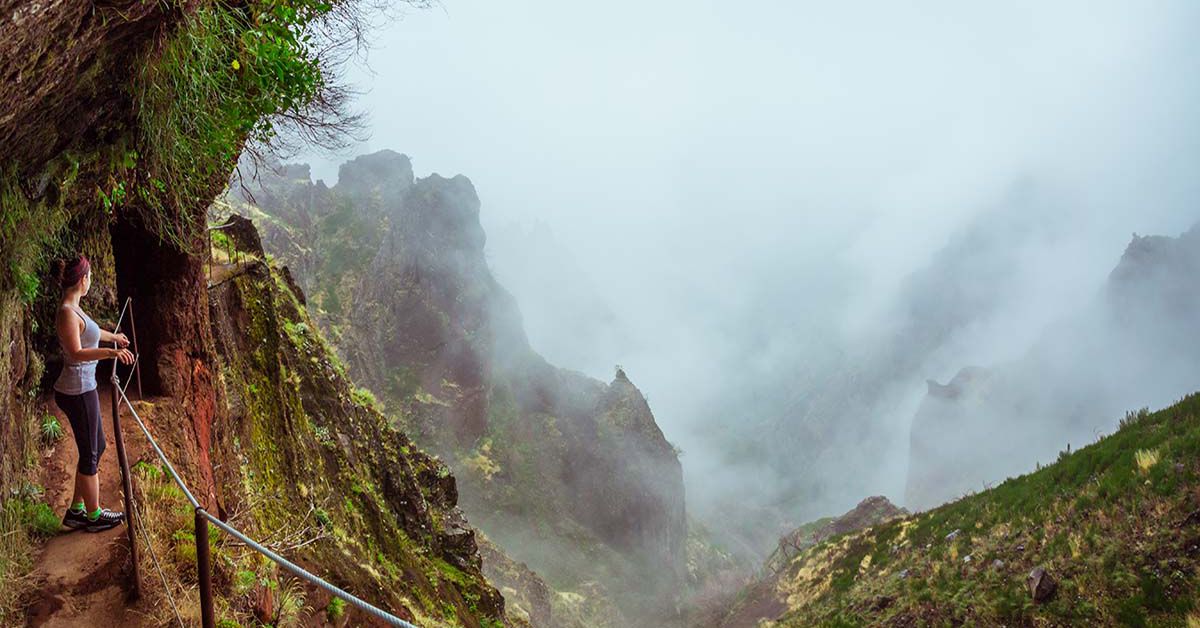 Boat trips are offered from Funchal to whale and Dolphin watch as well as visits to the ‘Deserted Islands’.  Diving is also catered for.

Oh yes and I suppose I should mention for the fanatics!  I did see one tour offered featuring the childhood haunts of the footballer Cristiano Renaldo who was born in Madeira and started playing for one of the local youth teams. (The airport is named after him too!)

Hotels in Madeira range from the exclusive 5plus* luxury Belmond Reid's Palace - even if you don't stay there do go for afternoon tea (make sure you book well in advance) through to self catering apartments and villas.  Truly something for everyone.